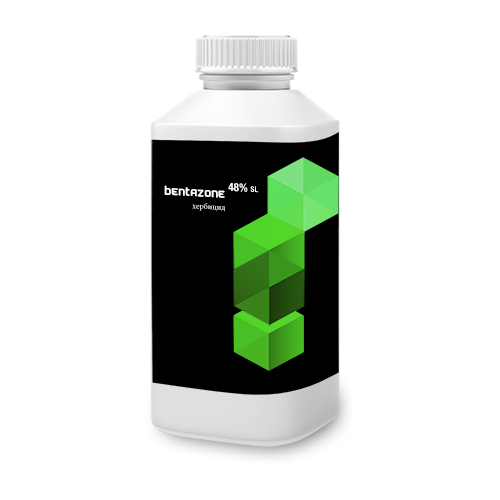 Soji: 480 gr./lit. BENTAZON,
in the form of easily soluble
concentrate for emulsion.

It is widely used as a contact, selective “post emergence” herbicide for the effective suppression of many problematic weeds in cultivated crops, which are hard to suppress with other herbicides. It does not act as a soil herbicide. The action is reduced in cool and dry weather. It is used only as a foliar herbicide, to eliminate the already overgrown perennial broadleaf as well as the overhead parts of some perennial weeds in the following crops: – Autumn and spring cereals – Beans and peas – Soybeans, peanuts – Alfalfa – Corn and sugar maize – rice – potato – onion The maximum number of treatments on the same surface is allowed only once a year. In the process of the treatment of the treated crop, only stern cereals (wheat, barley, triticale) soybeans and alfalfa can be sown. Do not mix with phosphorus insecticides and toxins. It can be used in combination with fertilizer for foliar nutrition and adhesions for leaching and adhesion of the leaf solution.

It is used in all types of stern winter and spring cereals during the 3.0-4.0 l / ha boundary sidewalk for efficiently suppressing Anthemis, Lapsana and other weeds, with 350-400 liters / ha of solution.

It is widely used in vegetation against all broadleaf weeds at a dose of 4.0-5.0 lit. / ha for the destruction of Cyperus, Scirpus, Alisma, Monochoria, Sagittaria and Commelina. Does not affect Panicum spp. Prior to treatment the parcels are emptied or are holding a completely low level of water.

Spraying is performed after the weed and cropping of the plants with 300-500 lit. / ha of solution, on a pure sowing or on a joint crop of maize and beans, without danger of phytotoxicity.

For the eradication of broadleaf weeds in newly sown alfalfa, 3.0 liters / ha is used when the culture is in a phase of 15 to 20 cm. with 400 liters / ha of solution.

In soy is used at a dose of 3.0-4.0 lit. / ha for effective destruction after the release of Abutilon, Cyperus, Datura, Hellanthus, Ambrosla, Sinapsis, Xanthium, Portulaca, Polygenum and other economically important weeds.

Be the first to review “Bentazone” Cancel reply