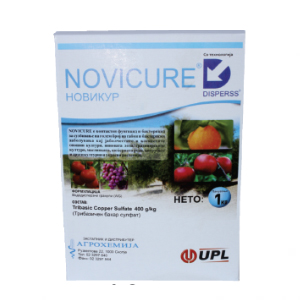 Copper ion accept spores of pathogenic agents during their clinging and alter until the treated surface has a high enough concentration to kill the spleen tissue. The activity is limited only during spray clearing, therefore the tribasic copper sulphate is fungicide, bactericide and algicide with preventive action. The fungicide deposit must be applied to the culture before the spilling of the spores begins, ie before the infection is achieved.

It is widely used in the orchards for suppression of fungal and bacterial pathogens, in a dose of 1.0 kg. per 100 liters. water, after declining leaf mass (from November to March), during the resting of the vegetation, ie, the kneading of the fruits in the skeleton fruit, until the phase of the mushroom ears, in the apple fruit. Against excoriosis and other diseases of the vine, the initial spraying is carried out with 0.3% solution in the initial development stage of the elder.

Vegetable crops
Due to low poisoning and effective action and against bacterial diseases, against which other fungicides are insufficiently effective, it is widely used for preventative protection against very economically important diseases of all horticultural crops. It can be used through foliar sprays, at a concentration of 0.35% or through the systems for roasting, at a dose of 10 to 15 kg / ha. Since the pathogenic agents act before the infection is carried out, it is necessary to repeat the sprays at intervals of 7-10 days, as well as after every heavy rain. It can be mixed with foliar fertilizers, soup-based preparations and insecticides.

Vineyard
A culture that tolerates copper fungicides to protect against excoriosis, burning, and many other weak pathogens that paratize on the vine cortex. Targeted treatments in the head of chocots, are performed before the start of vegetation, with 1.0kg. per 100 liters. water. With the formation of the shoots (3 to 8 cm), it is treated with a 0.35% protection against excoriosis, together with COSAVET DF (0.4%) and ALGA 600 (1.0 kg / ha). During vegetation, foliar sprays are repeated at intervals of 7 to 10 days, depending on the conditions for burnout infection, in combination with insecticides, foliar fertilizers and SPREADER (0.1%) for adhesion.

Fruit fruits
In protecting bone fruits from pathogenic agents, the crucial time is the time of intervention. The sooner, the more successful. The fight begins with the decline of the leaves – by November beginning of December with 0.8 kg. per 100 liters. point. Better results are achieved if treated with guns and at least 1000 liters of solution. spraying is repeated at the time of kneading the folders, in combination with MOVENTO (2.0 lit. / ha), against the bloody lice and other pests.

Apple fruit
It is recommended for winter spraying from falling of the leaves to the kissing of the folders at a dose of 1.0 kg / 100 ml. water. The foliar application is repeated from the beginning of the vegetation until the “mice ears” phase with a concentration of 0.35%, in combination with CaBORON (2.0 lit. / ha) and SPREADER (0.1%) for leaching and adhesion.

Be the first to review “Novicure” Cancel reply