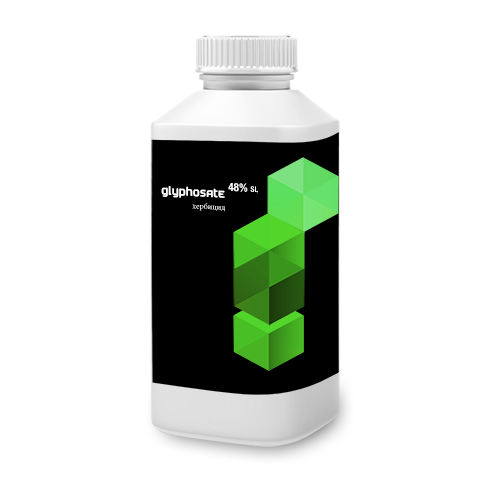 Contains: 480 g / liter. Glyphosate in the form of an emulsion water dispersion concentrate.

Quickly absorbed through the leaf mass and other vegetative parts of the treated plants and immediately transported to the above-ground and underground parts of the plants. Isopropyl ammonium salt prevents the synthesis of the essential aromatic amino acids needed in the biosynthesis of proteins. Quickly inactivated in contact with the soil.

It is widely used for destroying the annual and perennial classes, broadleaf weeds, before harvest, in beet at a dose of 3.0 to 4.0 lit. / ha for the eradication of one-year and permanent classes and broadleaf weeds in the stubble and after sowing before sprouting in many cultures, such as conducted spraying in crops with vines and olives, in a dosage of up to 8.0 lit. / ha, in orchards, pastures, forest plantations and industrial objects in a dosage of up to 9.0 lit. / ha. It can also be used for sterilizing the reeds in the irrigation and drainage channels at a dose of 4.0 lit. / ha.

Mixing TOTALCID 480 SL with other protection products may reduce its effectiveness.

As a formulated product, by ERA, it is classified in group III (slightly poisonous pesticide). It does not irritate the skin, the nerve negative effect of the reproductive organs, is not carcinogenic, can irritate the eyes. It does not accumulate and quickly decomposes into soil, water and topocranial organisms. When using, be careful not to come into contact with the eyes. Wear goggles and protective clothing.

Dirigible sprays are performed, most often with guns only in the ranks, early in the spring when the weeds reached 20-30 cm. in intensive growth with a dose of 1.0 liters. preparation for 50 liters. water (up to 8.0 liters / ha) If necessary, the spraying is repeated in the period after the lush development of the hazel, with 400 to 500 lit. / ha water.

Spraying is carried out on the entire surface after the harvest, with a dose of 8.0 lit. for preparation and 600-800 lit. / ha solution, for effective destruction of the herbaceous, reed, shavar and other durable weeds. After spraying, it takes a period of 30-40 days to establish a new culture.

Forest plantations
It is widely used for the effective destruction of plain vegetation in evergreen conifers at a dose of 1.0 liters. preparation for 50 liters. water, and a maximum of 8.0 lit. / ha preparation, from 500 to 700 lit. / ha solution.

Be the first to review “Totalside 480 SL” Cancel reply